The Power of SNP's – Even Without Population Data

Feel free to link to this page, but please do not reproduce this material without permission of the author.

How many SNP's equal one STR? one RFLP?

Single nucleotide polymorphisms (SNP) have the potential to be just as discriminating as loci of high polymorphism such as VNTR-RFLP or MVR systems – you just need more of them. This is obviously true for forensic identification. It is also true for more complex problems such as deciding sibling-ship or drawing inferences from mixed stains.

So there is a tradeoff possible:

What is the rate of tradeoff? How many SNP's per STR? per VNTR-RFLP?

The rate of tradeoff is not simple.

SNP's can be valuable in casework even without population data.

The method of analysis is exact calculation, using an idealized model of loci, to wit: Likelihood ratios are used of course for the analysis. The "typical" likelihood ratio is defined as a geometric-mean-value – i.e. not the arithmetic mean (which is not sensible) – but as an average taken in the multiplicative sense. 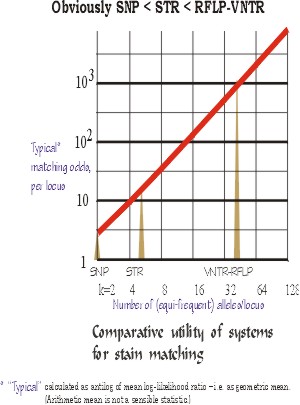 From the graph (triangle heights) we have tradeoff rates

To replace three VNTR-RFLP's, you need more than 30 SNP's.

Suppose a laboratory does both kinds of casework, at present using a battery of non-SNP markers. They consider switching to a battery of SNP's. They determine that the SNP battery will be equal to what they now get for forensic work. Then, they will be losing performance on their paternity work. Paternity is "harder" than forensic work for SNP's.

I made calculations and comparisons for the following set of problems:

Why is a database of size N=0 big enough?

because you can afford to have a lot of SNP's.

Suppose we have a panel of 100 SNP's for stain matching. Genotypes are AA, AB, and BB. Suppose a crime is committed in a possibly highly inbred population for which there are no population statistics.

Nonetheless, it is reasonable to hope (not assume!) that the people are not genetic clones, and that the allele frequencies will generally be in the 30-70% range since the loci were presumably screened for polymorphism in some population.

Moreover, we assume that the loci have been confirmed to be selectively neutral, and unlinked.

A 100-locus genotype, matching between suspect and crime stain looks like

Ignore all but the heterozygous loci.

Every heterozygous locus contributes a likelihood ratio > 2 even in a substructured population.

Database of size N=0 – some details

This work was partially supported by table legs and a chair.